In this tutorial, you will learn how to:

The video below shows the instructor completing the tutorial, so you can watch and follow along, or skip the video and jump to the prerequisites section. 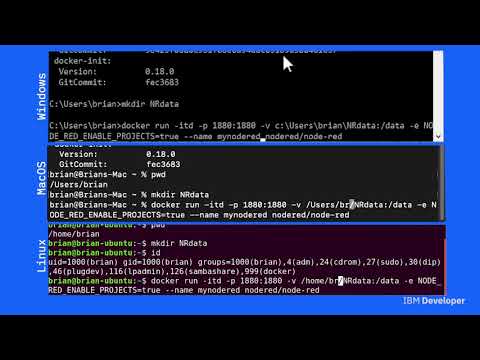 To complete this tutorial, you need:

You can complete this tutorial in less than 20 minutes.

When using Node-RED in production, you need to be able to work within a DevOps process, which relies on application source being managed by a source control system, such as git.

This is also a requirement when creating cloud native applications. The first rule for 12-factor apps is Codebase - One codebase tracked in revision control, many deploys

First we need to decide what is a Node-RED application code base?

A Node-RED application is defined by a flow file and an optional credentials file. However, the flow may require some additional nodes to be installed. The flow runs within a Node.js application, which is the Node-RED runtime. This runtime can be customised and configured, so to fully capture a Node-RED application code base you need to capture the :

For this workshop a starter git project has been provided, containing a Node-RED runtime, customised to be managed by a cloud.

We are using the public github service to work through this tutorial, but Node-RED works with any standard git service. So after completing the tutorial you can choose your preferred git service or you can setup your own git server to work on premises.

Follow the instructions to fork the starter git repository, which is contains a starter template for a new project. This will create a repository in your own github account so you can make changes to the content.

Node-RED has the projects feature, which is turned off by default. It allows Node-RED to work with a version control system to manage the Node-RED flow and associated content.

There are 2 ways of enabling projects in Node-RED:

In this tutorial we will run Node-RED in a Docker image, this removes the need for a local install of Node.js and node-RED, but if you have Node-RED already installed and want to enable the projects feature, then you should edit the settings.js file:

On your system edit file .node-red/settings.js in your home directory. At the bottom of the file change the projects setting to enabled : true

Follow the instructions below to start Node-RED with the project feature enabled. The commands need to be entered in a command or terminal window, running as your normal login user:

The git integration built into the projects feature of Node-RED will allow you to clone an existing git repository or create a new repository from within the Node-RED editor. You will also find a new Projects entry in the main menu, where you can change the current project, create a new project or look at the current project settings. Node-RED stores projects files in a directory called projects in your Node-RED user directory, this defaults to .node-red/projects in your home directory on your operating system. Each projects is stored in its own directory within the projects directory.

For this tutorial the Node-RED user directory is the NRdata directory you created in the previous step, so you will find project directories in NRdata/projects.

You can also pull changes from the repo, so if a team is working on the same Node-RED application they can push their individual changes and the other team members can pull the changes.

Follow the instructions below to cause a merge conflict then resolve it.

You can remove the mynodered container instance without loosing any data, as the docker run command mapped the NRdata directory into the container, so all Node-RED data has been persisted in that directory, outside the container.

In this tutorial you:

You can now work with Node-RED in a team environment synchronising via a Git repository, ensuring all changes to your Node-RED applications are version controlled.

Move onto the next tutorial, where you will learn how to package your application into a container.